As I mentioned in the first wedding cake post, the cake itself is for a smaller group of family attending the ceremony, and we’ll be serving cookies at the open house later in the afternoon. I spent so much time and effort finding the dogwood flower cutter, it seemed silly to only use it for the cake when we needed cookies anyway. Having now finished the cookies, I think it would have been easier to just make enough cake for everybody!

My sister-in-law, Cooking with Carlee, has made some adorable sugar cookies with royal icing for holidays and birthdays, so I asked her for quite a bit of advice, starting with a recommendation for a go-to sugar cookie recipe. It turns out, she has exactly that.

I also needed a royal icing recipe and confirmation that I could in fact make and decorate these in advance and freeze them. I came across Good Things By David and what he swears is a perfect royal icing recipe that can in fact be frozen, provided the decorated cookies are properly sealed and are not exposed to air until they are back to room temperature.

I like his recipe because it calls for meringue powder (not egg whites) and has lemon juice, which gives it a little tangy refreshing kick. I’m not going to rehash the recipe here. Read his post on it, which also contains important notes on storage and consistencies.

The cookie dough was easy to make and easy to work with. The only difficult thing was getting as many dogwood cookies as possible cut before my 3-year-old baking assistant Q co-opted all the dough for pumpkins and candy canes.

The flower impression mat set I purchased for the gum paste flowers has a mold for dogwood centers. Rather than use gum paste, which sets hard and is apparently not delicious, I decided white modeling chocolate tinted green would be much better centers for these cookies.

I have only attempted modeling chocolate once, and the combination of using chocolate chips rather than better chocolate and not precisely measuring anything (brilliant, I know), turned it into something of a disaster. This time I used white baking chocolate and followed this recipe from WickedGoodies.net.

Julia Usher, who has a series of You Tube videos demonstrating how to make amazingly ornate cookies and cakes, has a video on modeling chocolate, which gave me great comfort when my ball of modeling chocolate was a greasy green mess. The answer, quite simply: blot it.

(Note: It was a series of Julia Usher videos that inspired the chocolate lace wrap on the February cakes. Don’t think I ever linked those, but they are worth looking up if you are so inclined. I’ll get back to it eventually)

This chocolate then went from super oily to super crumbly to perfect for shaping with just a little bit of kneading.

Next up was the royal icing. The recipe suggested that the consistency right out of the blender was perfect for outlines, so I bagged it up and got to work. Sloppy work, as it turns out. I need to steady my icing hand a bit. When it came time to fill them, I had even more troubles. The first 2 attempts at “flooding” icing were too thick and wouldn’t spread. It took a lot of mixing and A LOT of extra water to thin it out.

At first I followed the ubiquitous advice to add the water 1/4 tsp at a time, but it was taking so much time that I soon was adding 1/2 – 1 tsp each time. Fortunately somehow it never got too runny.

The flooding icing, after all that extra water and subsequent beating, ended up noticeably whiter than the outline icing. There wasn’t much to do about it, so I just carried on covering them. Eventually I enlisted my husband to help smooth out the icing: I filled, he fixed, and we got done much faster than I would have alone.

The last step was to add some pink highlights. Originally I thought I’d use pink sugar crystals, but somewhere along the way I decided to try out the pink pearl dust I would be using on the gum paste flowers for the cake.

I didn’t photograph that process, but I sort of ruined some of the cookies by using too wet of a mixture (i.e. more vodka than pearl dust, when it should be a 1:1 ratio), so the vodka dissolved some of the royal icing. Some of them look fine still; some less so. Some were bad enough that I let Q eat them, much to his delight. 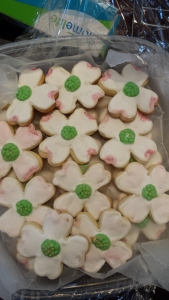 The trick to preserving frozen royal icing seems to be wrapping the cookies tightly to seal out air and then bringing them back to room temperature without unsealing them. If they stay sealed, no condensation will form on them to streak the icing.

Most sites recommended individual bagging of cookies, but that was not going to happen for each of my roughly 5 dozen flowers. Instead I stacked them, placing wax paper between layers, wrapped the whole thing in cling wrap, and sealed it in a plastic container.

Success? I can confirm they tasted great before going in the freezer. As for the final product, I’ll let you know in a few days!